Challenging but runnable terrain (with notably less mud and brambles than some past years), North Wiltshire Orienteers’ investment in a completely new map was well received. “A huge amount of effort went on behind the scenes securing permission for this unique event and of course the new map. Based on the feedback from the day it was all worth it and we’re thrilled so many people enjoyed the courses and the fantastic atmosphere”, said event organiser David Livingstone.

A dry day with sunshine for the later starts, the good conditions resulted in some fast times, with a strong run from Devon’s Adam Potter putting him at the top of the Brown course by nearly three minutes. Colin Dickson of the British Army Orienteering Club topped the Blue while junior Oliver Tonge’s impressive run for Bristol Orienteering Klub’s Yvette Baker team took the top spot on the Green course.

The Savernake event was also the seventh in the 2018/19 South West Orienteering Association Galoppen League, for which results are pending. 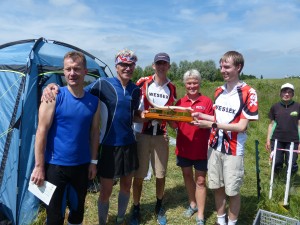